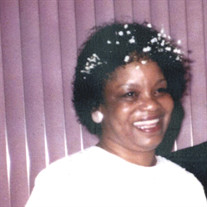 Arlene Johana Childs Williams was born on Friday, January 7, 1938 in Pittsburgh, Pennsylvania. Her parents were the late Howard R. Childs, Sr. and Alice Walton Childs. She was the eldest of two children. Arlene received her formal education in the Pittsburgh Public School System. She graduated from Gladstone High School in Hazelwood, PA. Arlene worked at the Veterans Affairs Hospital in Pittsburgh, PA She retired after many years of service as a Certified Nursing Assistant (CNA) in hospitals, nursing homes, personal care homes, and private residences. She enjoyed bowling, bingo, going to the beautician, an d going "out on the town" with her "Golden Girls," Earlene Williams, and Rita Price. The late Reverend Charles E. Wright baptized Arlene. She was a member of St. John The Evangelist Baptist Church of Hazelwood for over 60 years. Arlene was a charter and founding member of the Angelic Choir. She served in the Kitchen, Missionary and the Pastor's Aide Ministries. She served faithfully in the Senior Choir until her health prevented her from being active. Arlene joined Greater Pittsburgh Gospel Chorale Union, a subsidiary of the National Convention of Gospel Choirs and Choruses, Inc., over 30 years ago. She loved to sing the "Songs of Zion." Arlene was also a member of the Hazelwood Car Barn Senior Center where shedai;y enjoyed laughing with her friends and acquaintances. She was united in holy matrimony to the late Sonny "Rico" Hall and to the late Carroll Williams with whom she shared marital bliss. Arlene will be sorely missed by her family and friends for her fried chicken, her gentle giving heart, and her infectious laugh. She departed this life on Tuesday, July 7, 2015. Arlene is in Glory-Land rejoicing with all of her family and loved ones who have gone on before. Arlene leaves to cherish and honor her precious memory (1) daughter, Avis (Bill) Branch; (2) sons, Walter Rico (Darlene) Hall, and Kelvin Hall; (1) step-son, Jermaine (Alexis) Hall; (17) Grandchildren: Mikal, Malik, Cyrus, Shikita, Tiffanie, Donald, Jaron, Walter, Reckia, LaToya, Andie, Rico, Raynisha, and Kevanna, Brit Hall, Jazmine Hall, Pamela Thompkins; (32) great-grandchildren: (1) brother, Howard R. Childs, Jr.: (3) sisters in-law, Josephine Jones, BaeRue Cunningham, and Ernestine Hall; (1) uncle, Buddy (Dorothy) Walden; (2) cousins, who were like brothers, Stevie Lee and Clifford Wood; a special step daughter, Angela Baltimore; and many nieces, nephews, cousins, relatives and friends.

The family of Arlene J. Williams created this Life Tributes page to make it easy to share your memories.

Send flowers to the Williams family.