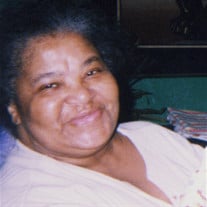 Darlene Elizabeth Geary was born on January 25, 1944 in Pittsburgh, Pennsylvania. She was the daughter of the late Earl Kenneth Geary and Callie Elizabeth McNish Turner Geary. She was the youngest of 23 siblings and raised in the Garfield section of the city. She was educated in the Pittsburgh Public School System where she attended Westinghouse High School and received her GED from Connelly Vocational School completing all her coursework with high honors. Education was very important to her and she went on to receive an associated degree in specialized business from the Wheeler School and a second degree in general clerical practice from Duff's Business School. Darlene was united in marriage to Richard Brewer. In addition to raising her family, Darlene, over the years worked for a number of institutions and organizations; Holmes Nursing Home, Goodwill Industries of Pittsburgh as an executive assistant, and a long term position as administrative assistant for the Westgate Village Resident Council. Darlene was a community activist with a passion for helping others. She used her position at Westgate along with her persistence, drive, and commitment, to bring about many positive changes for the community. She became a member of Covenant Church of Pittsburgh on September 4, 2002, and was baptized under the pastorate of Bishop Joseph Garlington on January 25, 2004. She was an active member until illness no longer permitted her to participate. Darlene, or "Gamm" as she was called after becoming a grandmother was devoted to her family. She was a loving and caring mother, grandmother, and great grandmother. Gamm loved card games, coloring books, singing, and she was an absolute whiz at doing crossword puzles; but more than anything, she loved the Lord with all her heart and she read her Bible faithfully. On June 7, 2014, after a lengthy and courageous battle with cancer, the Lord called Darlene Elizabeth Brewer home. Gamm leaves to cherish her memory her five children; Darlene (Alaric) Craig, Richard Brewer, Jr., Machelle (George) McIntosh, Van Brewer, and her youngest child; devoted daughter and caregiver, Vangalene Brewer; 18 grandchildlren, 24 great grandchildren; siblings; Clarence Turner, Earl Kenneth (Duck) Turner, and Harold Turner; other relatives and her many good friends too numerous to mention.

Darlene Elizabeth Geary was born on January 25, 1944 in Pittsburgh, Pennsylvania. She was the daughter of the late Earl Kenneth Geary and Callie Elizabeth McNish Turner Geary. She was the youngest of 23 siblings and raised in the Garfield... View Obituary & Service Information

The family of Darlene Elizabeth Brewer created this Life Tributes page to make it easy to share your memories.

Darlene Elizabeth Geary was born on January 25, 1944 in Pittsburgh,...

Send flowers to the Brewer family.