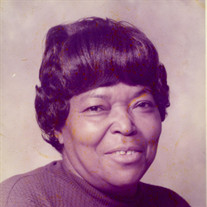 Elma Grayson was born on March 11, 1924 in Duncan, South Carolina. She was 1 of 3 children from the union of the late James and Willie Grayson. In her youth she and her siblings attended the Hopewell Baptist Church and there she was baptized. She loved to sing in the choir and praise the Lord. She also received her early education in Duncan. Elma was united in marriage to Willie Anderson and from this union 8 children were born. In addition to caring for her own growing family, Elma also worked as a nanny for a prominent South Carolina family. When she and her family relocated to Pittsburgh Elma, being no stranger to hard work, found employment with Columbia Cleaners in West Homestead where she worked for many years. With her children grown and gone, Elma made the decision to return home. She then went to work for Lyma Mill working as a craneman until her retirement. Shortly after retiring she came back to Pittsburgh to be near her children and sister, Rose. She then went to work for Kennywood Park and remained there faithfully for a number of years. Elma worked until her failing health no longer permitted her to do so. Elma was a proud woman and was dedicated to her family. She always did more listening than talking. She was well thought of by all who knew her. On Friday, June 19, 2015, Elma Anderson went home to be with the Lord. She is preceded in death by her daughters, Maryann Thompson and Rosemary Anderson; son, Ralph Anderson; grandson, Marlon Epps, and brother, Jack Grayson. She leaves to honor and cherish her memories of her, 5 children: Willie (Gloria) Anderson, Jr. of New York, Elizabeth Terry of Pittsburgh, Willa Anderson of MN, Virginia (Joseph) Howard of Homestead, and Jimmy Lee Anderson of Homestead; devoted sister and best friend, Rose Smith of Munhall; grandchildren: Kirby, Doug, Susan, Dana, MelRey, Vonnie, Melvin, Raheem, Artic, John, James A. DaSaunta, Ralph, Marcell, Paris, Keith, Jerome, and James T; great grandchildren and friends. She is already missed.

Elma Grayson was born on March 11, 1924 in Duncan, South Carolina. She was 1 of 3 children from the union of the late James and Willie Grayson. In her youth she and her siblings attended the Hopewell Baptist Church and there she was baptized.... View Obituary & Service Information

The family of Elma Anderson created this Life Tributes page to make it easy to share your memories.

Send flowers to the Anderson family.