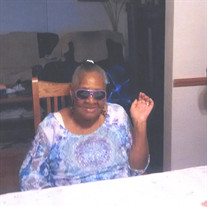 Erma Jean "Mikey" Adams was born to the late Sherman and Annabelle Shaw on August 13, 1930 in Pittsburgh, PA. On Friday, January 29, 2016, Erma Jean completed her earthly journey and the Lord called her home. Erma was educated in the Pittsburgh Public School district. She lived in Homestead, PA most of her adult life where she raised her children. She absolutely loved life! Whenever the opportunity came along, she loved to travel and go on vacations with her family. She especially enjoyed all the family cookouts and holidays where she was famous for making the deviled eggs. Her favorite pastime was shopping and finding discounted items at the thrift stores with her daughter, Barbara. She was a member of Clark Memorial Church in Homestead, PA where she attended every Sunday until she was unable too. At the church, she was a member of the Loyalty Club and held the position as recording secretary. In addition, she was involved in the Steel Valley Salvation Army Home League Women's Ministry since 2012. She leaves to cherish her memory: Caron Ann Payne (stepdaughter), Leonard Adams (California), Barbara J. Ford (Bert), Tabansi Obialo, Luwanna Adams, and Rodney Blackwell; sisters: Mary Ellen Allen, Grace Cox; brother: Charles Howard; sister-in-laws: Rose and Barbara Shaw; grandchildren: Delbert Mackson, Jr, (Terry), Dorian Mackson (Gugu), Danette Mackson, Isiah Adams, and Samantha Payne; nieces: Dalphine Mays, Erma Jean Nieves, Lynn Johnson, Unice Bey; nephew: Richard Bey; many cousins; along with many step grandchildren, great grandchildren, great nieces, and great nephews; longtime good friend Audrey Weaver and lifetime friend Delbert Mackson, Sr. Erma Jean known to everyone as Mikey was loved by so many people and good friends too numerous to mention. She is preceded in death by her brothers; Sherman and Kenneth Shaw, Elias and Elmer Howard and sister; Ima Bey.

Erma Jean "Mikey" Adams was born to the late Sherman and Annabelle Shaw on August 13, 1930 in Pittsburgh, PA. On Friday, January 29, 2016, Erma Jean completed her earthly journey and the Lord called her home. Erma was educated in the Pittsburgh... View Obituary & Service Information

The family of Erma "Mikey Adams created this Life Tributes page to make it easy to share your memories.

Erma Jean &quot;Mikey&quot; Adams was born to the late Sherman and Annabelle...

Send flowers to the Adams family.