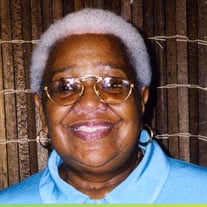 Geneva Coles was born on October 17, 1934 in Homestead, Pennsylvania. She was the daughter of the late Jesse and Nelle Witcher Coles. At a young age the family relocated to the then closeknit community of Glen Hazel where she would later raise her own family and raised hmost of her adult life. Early on she also accepted Christ as her personal Savior and was a lifelong member of Second Baptist Church. She played an active role in church life and attended Sunday School faithfully. She was a Sunbeam Advisor, served on the Missionary Board, sang with the Hallelujah Gospel Chorus, and could always be found whenever the need was there hard at work with her kitchen committee. Geneva was educated in the Pittsburgh Public School System attending Burgwin Elementary School, Gladstone Junior High, and graduating with honors from Taylor Allerdice High School in 1952. She not only excelled academically but played sports, was a member of the chorus and The Future Nurses of America. She was united in marriage to the late James P. Black. No stranger to hard work, Geneva over the years, held positions with Allied Optical Company, Clark Sanitation, United States Steel, and Gladstone School, but her best and most endearing position was that of caregiver. In addition to nurturing her own children, she was a foster parent and opened her home to more than 18 children over the years. Geneva was God fearing, loving, and kind. She enjoyed bowling and singing. She gave so much of herself and touched so many people. On May 7, 2016 Geneva Coles Black departed this earthly life for her heavenly home. She is preceded in death by her siblings: Silas, Marion, Joseph, and Beatrice. She leaves to cherish her memory her beloved children: Roxanne, Rochelle, and Avonty; grandchildren: Tashonna, Keenyn (Maxine), and Jaquan; great grandchildren: Xavier and Joi; Siblings: Berdie and Archie; nieces, nephews, other relatives, her church family, and good friends too numerous to mention. She will be greatly missed.

Geneva Coles was born on October 17, 1934 in Homestead, Pennsylvania. She was the daughter of the late Jesse and Nelle Witcher Coles. At a young age the family relocated to the then closeknit community of Glen Hazel where she would later raise... View Obituary & Service Information

The family of Geneva Coles Black created this Life Tributes page to make it easy to share your memories.

Send flowers to the Black family.