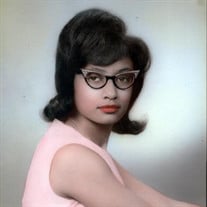 Hazel Hunt was born on May 5, 1947 in Pittsburgh, Pennsylvania. One of four children born to Harold S. Hunt Sr. and Emma Madeline West Hunt. She was raised in Homestead (The Ward) and later the family moved to Fourteenth Avenue, where she resided until her passing. She accepted Christ at the age of 12 and was a member of the Second Baptist Church of Homestead. As a lifelong devoted member of the church, she sang in the choir, served on the Junior Missionary Board, the Pastor’s Aid Committee, Kitchen Committee for Sunrise Service and was crowned the Queen of Fairview Park Association. She received her education from the Homestead School District where she was an honor student, participated in the band, the drama club and graduated in the class of 1965. In the fall of 1965, she attended California State University for a year majoring in Education. While obtaining her education, she met the love of her life, Gerald “Dewey” Brown and from this union a beautiful girl was born. The following year while working for the IRS, she enrolled in Point Park University where she graduated in 1971 with a Bachelor of Arts degree in Elementary Education. In the fall of 1971, she was hired by the Steel Valley School District. Hazel taught at Franklin, Barrett, and Park Elementary Schools, where she was a Title I Math and Classroom Teacher from 1971 – 1981. While teaching, in 1973, she obtained her Master’s Degree in Special Math from Penn State University. She continued her teaching career at Woodlawn Middle School teaching English and Math from 1981 through 1995. Hazel went on to Barrett Elementary School as a Remedial Math Teacher from 1995 – 2005. She was also the school Math Coach at Franklin, Barrett and Park Elementary Schools from 2005 until her retirement in 2006. As a lifelong educator, she sponsored many math competitions and obtained many awards. During her tenure, Hazel made a huge impact on many students resides both inside and outside of the classroom, as she coached the Girls Volleyball, Girls Basketball, High School Junior Varsity and Varsity Cheerleading teams. During this time, she also worked part time for Stop & Save at the West Homestead and Homestead locations for many years. After retirement, Hazel enjoyed traveling and cruising with her sister, with Paris being one of her beloved trips. She also loved shopping, eating out, and conversations with anyone who would listen. Her favorite pastime was spending time with her only daughter, grandchildren, her nephew who was more like a son, phone calls with her brother and cousin, and friends, whom she loved unconditionally. Hazel was a loving, giving, thoughtful, supportive and kind person who always had a lesson to teach. She treated everyone like they were her own family. If you came across her path, she made an everlasting impact. Suddenly, on September 9, 2020, Hazel was called home to be with her Lord and Savior. She was preceded in death by her parents Harold Sr. and Emma Madeline Hunt; brother Ronald J. West and aunt Ethel West Humphries. She leaves behind to cherish her memory, her only daughter, Denise Lynn Hunt; sister Denise E. Hunt; brother Harold S (Linda) Hunt Jr. “Boopie”, Charles (Roberta) West; four grandchildren Torrey D. Thompson, Ronell Robinson, Armani J. Bates and Pria Thompson; great grandchildren Amiyah, Skylar, Tyvir, Aria, Azir, Alaia and Trini; nephews Eric, Marco, and Ricco Hunt, and niece Shasta Hunt; two best friends Kathleen Randolph and Ayesha Williams; and a host of cousins, extended family and many friends.

Hazel Hunt was born on May 5, 1947 in Pittsburgh, Pennsylvania. One of four children born to Harold S. Hunt Sr. and Emma Madeline West Hunt. She was raised in Homestead (The Ward) and later the family moved to Fourteenth Avenue, where she... View Obituary & Service Information

Send flowers to the Hunt family.