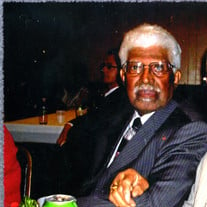 Jackson Blount Thoms, Sr. was born on August 31, 1926 in Penn Township, Pennsylvania. He was the 4th of 5 siblings from the union of the late Samuel Tilden Thoms and Louise Boyd Thoms. Jack grew up in the Homewood section of the city and attended Westinghouse High School. After high school, he joined the United States Army proudly serving his country in World War II and prior to his honorable discharge received the Army of Occupation Medal and the World War II Victory Medal. Jack was united in marriage to the love of his life and best friend, Hatty Nesby on December 25, 1948. This loving union would last for 62 years and produce 3 devoted and caring sons. They raised their boys on a closeknit community of Whitaker among other family, cousins, and good friends and were actively involved in every aspect of their upbringing. Jack and his wife, Hattie, became lifelong, respected, and loved members of the area. Their political and social involvement in the life of the community truly made it a better place. Jack, never a stranger to hard work, held 2 fulltime positions for approximately 34 years; working for Port Authority Transit and DeBolt Transfer of Homestead. Jack was a longtime member of the First Baptist Church of West Mifflin where he was actively involved in church life. He was a member of the Male Chorus, Sunday School and Bible study. One of his proudest moments was the recognition by the Allegheny Union Baptist Association in 2006, for that faithfulness and participation. He was also a member of the Rankin American Legion, Post 527. Jack loved life. He was an avid lifelong Pittsburgh Steelers fan (attended the first 4 super bowls) and loved Nascar racing and traveling. He was an outstanding father and family man, God-fearing, gentle, and full of wisdom. On November 6, 2014, after a long and full life, Jackson Thoms was called home to be with the Lord. He is preceded in death by his beloved wife, Hattie Nesby Thoms and his siblings. He leaves to honor and cherish his memory his loving and devoted children: Jacqueline (Eric) Williams, Jackson B. (Darlene) Thoms, Jr., Leslie S. (Willina Walker) Thoms, and Craig E. Thoms; sister, Beatrice Johnson; 8 grandchildren, 12 great grandchildren; nieces, nephews, cousins, other family members, his church family, and good friends too numerous to mention. We love you, Pap.

Jackson Blount Thoms, Sr. was born on August 31, 1926 in Penn Township, Pennsylvania. He was the 4th of 5 siblings from the union of the late Samuel Tilden Thoms and Louise Boyd Thoms. Jack grew up in the Homewood section of the city and attended... View Obituary & Service Information

The family of Jackson B. Thoms SR created this Life Tributes page to make it easy to share your memories.

Send flowers to the Thoms family.