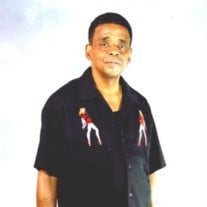 James Douglas Bright, Jr. was born on January 16, 1951 on Pittsburgh, Pennsylvania, to the late James D. Bright and Gladys Small Bright. He departed this life on Thursday, March 27, 2014 at the Veteran's Hospital in Aspinwall, Pennsylvania. In the 1960's, Jimmy attended the Clark Memorial Baptist Church in Homestead; where he accepted Christ as his Savior and was baptized. Jimmy's primary and secondary education was at schools in the Pittsburgh and Homestead areas. He was trained in electronics at the Schwab Vocational School in Homestead. On May 28, 1970, Jimmy received his high school diploma from Homestead High School. On August 19, 1970, Sergeant James D. Bright, Jr. enlisted in the United States Air Force during the Viet Nam War era. He honorably served our country for six years. Jimmy's employment was in electronics and security. He held such positions as aircraft electrician, electronic and microprocessor technician, and security officer and guard. On February 24, 1990, Rev. Alfred Blaylock united Jimmy and Brenda Scott in marriage. From this union came two daughters, Jamie and Ashley. In addition to their two daughters, he was a proud grandfather of three: Cameron, Dior, and Tireal. Jimmy loved to talk and would talk. In the home and community, he was known to talk plenty in conversation. Jimmy was affectionately called Pap Pap Easter by his grandchildren. At Easter time, his grandchildren would greet family with Happy Easter. So Pap Pap changed to Pap Pap Easter. He is preceded in death by his sister Debra A. Bright. Jimmy leaves to mourn his passing: wife Brenda, daughters Allison, Jamie, and Ashley; three grandchildren; sister Lesa Harrison of Vallejo, California; stepbrothers Yale, Eric, and Carey Lewis; his sister-in-law Debbie Watson; brothers-in-law, Albert, Gregory, James, Alvin, and Wayne Scott; many nieces and nephews, cousins, other relatives and friends.

James Douglas Bright, Jr. was born on January 16, 1951 on Pittsburgh, Pennsylvania, to the late James D. Bright and Gladys Small Bright. He departed this life on Thursday, March 27, 2014 at the Veteran's Hospital in Aspinwall, Pennsylvania. In... View Obituary & Service Information

The family of James Douglas Bright Jr. created this Life Tributes page to make it easy to share your memories.

Send flowers to the Bright family.