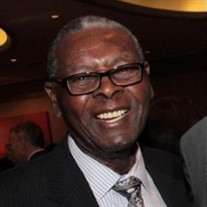 Josifani Munyika Moyo, affectionately referred to as Daddy, Pop-Pop, Uncle Joe and by most simply as “Joe Moyo”, was born on October 3, 1941 in Zishavane, Zimbabwe. Joe is the eldest son of six children born to Jairos Munyika and Shoorayi Shumba Moyo of the Shona speaking Bantu Tribe. Joe was fiercely devoted to his family, particularly to his mother, to whom he often described as “the kindest person one could ever meet”. By 1957, at the young age of 16, Joe was one of only four students in his primary class selected to attend Fletcher High School, a prominent government sponsored all male boarding school in Gweru, Zimbabwe. Upon graduation from Fletcher High School in 1963, Joe received a full scholarship to continue his academic pursuits in the United States at Waynesburg University, Waynesburg, PA, where he he earned a Bachelor of Science Degree in Mathematics and Chemistry. After graduation, Joe attended Purdue University in West LaFayette Indiana, where in 1970 he earned a Master of Science Degree in Chemical Physics. During this period in 1967 Joe married Janet Lee Patterson of Pittsburgh, PA. Together they spent the next fifty-four years through life together, during which time they produced two daughters, who became the center of Joe’s and Janet’s life. Erita Munyika Moyo was born in 1967 and Selina Munyika Moyo followed in 1974. From 1972 to 2020 Joe was the Academic Program Director and Mathematics Instructor at Bidwell Cultural Training Center-Manchester Craftman’s Guild, Pittsburgh, PA., where he was noted for his very successful and unique style of teaching, known as “Moyo’s Math”. At the sacrifice of his own desires, wants, and needs, Joe’s complete humility, devotion to his family and his personal values based on giving, and giving , and giving has left an unreplicable imprint of giving on his family, both in the United States and in Zimbabwe, and the City of Pittsburgh. Consequently, Joe leaves a legacy, which was truly ordained by GOD himself before the beginning of this world His deep affection and lifelong passion for golf, which he developed during his youth in Zimbabwe, continued to the end of his life. In fact one year Joe’s endless enjoyment of golf rewarded him with a remarkable hole-inone. Joe’s sudden and unexpected departure has left an enormous void filled with pain for his family and all of those who loved him. This is chiefly due to the one common denominator in Joe’s life, which was simple and quite clear, as his math lessons. It was “Love”. Josifani Munyika Moyo is survived by his beloved wife and life partner for fifty-four years, Janet Lee Moyo; Daughters Erita Munyika Moyo, Plainfield, Illinois; Selina Munyika Moyo Anderson, Son-in-Law Charles Anderson, Esquire, and adored granddaughter Leah Erita Anderson, Fort Mill, SC. Joe is also survived by two direct siblings’ eldest sister Erita Tagwi and younger brother Zivai Mbrenego Moyo of Zimbabwe. Joe is loved and cherished by scores of students in the Pittsburgh area and an army of extended family both in the United States and worldwide, and a host of friends. Joe’s only and last request is to have his remains returned to the soil and land of which he originated. His family on a date in the future date will fulfill his request.

Josifani Munyika Moyo, affectionately referred to as Daddy, Pop-Pop, Uncle Joe and by most simply as &#8220;Joe Moyo&#8221;, was born on October 3, 1941 in Zishavane, Zimbabwe. Joe is the eldest son of six children born to Jairos Munyika and... View Obituary & Service Information

The family of Josifani Moyo created this Life Tributes page to make it easy to share your memories.

Send flowers to the Moyo family.