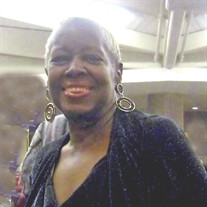 On June 2, 2015 God opened Heaven's gates and gave to Van and Lula Pressley, Sr., Lula Mae (Tuda) Pressley. The sixth child of their growing family, Born in Homestead, Pennsylvania, Lula, like her siblings shared her gift of singing in church, school and the community at large. During High School, she also became an accomplished majorette and proudly graduated from West Mifflin High School. In March 1971, Lula married her HS sweetheart, Timothy Veney and on December 21, 1971, they welcomed their only child, Kimberly. Lula enjoyed a career in medical records and supplies and after retiring, focused on her volunteer work with the Missionary Society and the Virginia Gladden Club at Park Place A.M.E. Church. Annually, she coordinated a sell-out Fashion Show that featured local clothiers and accessory purveyors. The shows were the talk of the town and Lula was very proud of its success. The summer of 1998, Lula and Harold Hall, Jr., declared their love for each other in a beautiful outdoor ceremony. To know Lula was to know her sense of humor and sorely would of encounter pass when she didn't tell a corny joke. She was a true friend and confidant who carried her friends' stories and experiences in her heart. Following the birth if her only grandchild, Kendal Simone, Lula's sole purpose was to be the best Grandmamma possible. To know Lula, was to know Kendal. Never would an encounter pass without hearing about the adventure of her Kendal-Cake. November 30, 2015; God again opened the gates of Heaven and at 1:30PM Lula re-joined our Father and her eternal father Van Pressley, Sr., if you see the skies shake a but, if you suddenly hear laughter, know that it's only Tuda, dancing or telling yet another corny joke. Here to continue her legacy of corny jokes: Her daughter, Kimberly, Granddaughter Kendal, Son-In-Law Herbert; Mother Lula Mae; Siblings: Janie, Jean Nellie, Naomi (the late Donald), Van Jr. (the late Donna), Rachel Ann (Joseph), Byrd (Patti), Donna Lee and Madelyn Pearline. Scores of family and close friends will also continue to hold her memory dear.

The family of Lula Pressley Hall created this Life Tributes page to make it easy to share your memories.

Send flowers to the Hall family.