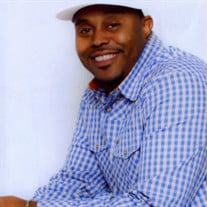 Marvin Daniel Womack was born on June 20, 1967 in Homestead, Pennsylvania. He was the youngest of 3 sons from the union of Beverly Ford amd Price Womack. "Merv", as he was called by family and friends alike, grew up in the then close-knit milltown of Homestead, surrounded by a large extended family of loving grandparents, aunts, uncles and cousins. Marvin was educated in the Steel Valley School System and a 1986 graduate of Steel Valley High School. He adlways loved the game if Basketball and was a skilled player in high school. He attended Park Place A.M.E. Church and was active in the youth activities there. After high school Marvin did a brief stint in the military (United States Marine Corps). After his return home, he gained employment with Duquesne University remaining there fir over 15 years. He also worked for a time with E.L.G. Metals and his last years of employment were as a truck driver for Amazon. Continuing with his love of sports and basketball in particular, Marvin was a referee for AAU Basketball Tournaments and also an assistant coach at Steel Valley Middle School. Marvin dearly loved his family, children, and grandchildren but the greatest influence on his life was his mother and he looked to her for wisdom and direction in his life. He loved the Lord and knew of the Lord's love for him. This was exemplified in his words of encouragement for others. On October 3, 2016, Marvin Daneil Womack departed this life. He is preceded in death by his brother, Timothy Clarke Ford and grandparents Geraldine and Bert Ford, Sr. He leaves to honor and cherish his memory children: Brandi Still, Asia Blevins, and Jeremiah Womack; beloved mother, Beverly Ford Womack and father, Price Womack; brother, Dion (Donna) Womack; ants: Carol Weems, Jacquelyn Ford, Rafiqah Ford, and Denise Edmunds; uncle, Bert (Barbara) Ford, Jr . other aunts, uncles, cousins, and good friends too numerous to begin to mention. He is already missed beyond words.

Marvin Daniel Womack was born on June 20, 1967 in Homestead, Pennsylvania. He was the youngest of 3 sons from the union of Beverly Ford amd Price Womack. "Merv", as he was called by family and friends alike, grew up in the then close-knit... View Obituary & Service Information

The family of Marvin Daniel Womack created this Life Tributes page to make it easy to share your memories.

Send flowers to the Womack family.