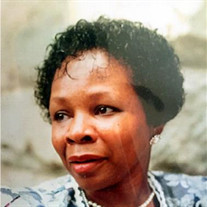 Millofred Russell, endearingly known as "Millie", was given the gift of life on April 27, 1939. She was the daughter of William and Johnnie Mae Russell as well as sibling to a host of brothers and sisters. Millie spent her childhood living in and around the Pittsburgh area. She grew to be an intelligent woman and warrior mother exhibited by fierce love, steadfast determination, strength and resilience, With God as her partner she stood guard over her children: Anita Laney, Montae and Jeffrey. She ultimately raised three of her children in Homestead, PA. Millie was a warrior activist who lifted her voice against injustice fighting for civil rights, welfare rights, and basic human rights. As a pillar in the community and a member of the Homestead Chapter of the NAACP, she took a strong stance on behalf of the African American students during the merger years at Steel Valley High School. In her career she was a staunch welfare rights advocate with the Welfare Rights Organization of Allegheny County (WROAC). Millie was a staff member for the Pittsburgh Neighborhood Atlas under the auspices of the University of Pittsburgh Center for Urban Research working to improve the city's neighborhoods and their relationship with city government, Millie also served for 10 years as the foreign student advisor at Carnegie Mellon University specializing and immigration advising services, career counseling, and new student orientation. God, in His infinite wisdom, called Millofred Russell home on September 13, 2017 to the mansion He has prepared for her. She is preceded in death by her parents; second born child, Laney; two brothers: Lavelle and Donald (PA); and sister, Maxine (MI). Left behind to cherish her memory are three children: Anita (NJ), Montae (CA), and Jeffrey (PA); siblings: Willa Mae (PA), Williams (OH), Velma, Laverne, Freddie, Earl and Frank of (PA) and Maria (HI); daughter-in-law, Tonia (CA); grandchildrenL Hillary (NJ), Olivia (NY), Jeffrey, Jr. and Montae Jr of (CA); great grandson, Zane (NJ) and a host of nieces, nephews, cousins, extended family and friends.

Millofred Russell, endearingly known as "Millie", was given the gift of life on April 27, 1939. She was the daughter of William and Johnnie Mae Russell as well as sibling to a host of brothers and sisters. Millie spent her childhood living... View Obituary & Service Information

The family of Millofred Russell created this Life Tributes page to make it easy to share your memories.

Send flowers to the Russell family.