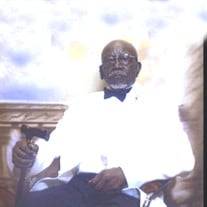 The eldest of 6 children, Ordlee Felder was born in Bishopville, South Carolina on June 28, 1920 to sharecroppers William and Azie Felder. At the tender age of thirteen, Ordlee embarked on a journey northward in hopes of a batter life. After short stays in South Carolina, Maryland, and Virginia, Ordelee hopped off a train in Homestead, Pennsylvania. There, Ordlee met Patricia Marilyn Burwell. The two married on July 26, 1958, from their union 7 beautiful children were born. In 1965 Ordlee joined Second Baptist Church of Homestead, Pennsylvania under Rev. O. C. Perkins. Ordlee was no stranger to hard work; he worked at Eat'n Park; Munhall Borough, and was a privately contracted handy man and cement worker. In 1957, Ordlee served on the Homestead Borough Street Department where he later retired in 1958 after 2 years of employment. Ordlee, affectionately known, as "Kilroy", loved The Pittsburgh Pirates. During baseball season, it was rare not to see Kilroy sitting in his chair, at home, enjoying the game. Ordlee loved gardening, and enjoyed tending to his tomatoes, peas, and green peppers. The only thing Ordlee enjoyed more was his independence. Many throughout Homestead and the City of Pittsburgh can attest to seeing Mr. Kilroy walking, and later on in his life, riding his scooter to catch the bus. At the age of 95 Ordlee "Kilroy" Felder departed this life. His strength surpassed anyone's expectations of what a man who had lived, cried, endured, and smiled through 34,721 days looked like. Ordlee is preceded in death by his dear wife Patricia "Tish" Felder. his son Vincent Felder, 2 sisters, three brothers James, William Lee, and Horm Felder, and his dear Aunt Marie J. Felder. Ordlee leaves to honor and cherish his memory; his children: Rev. James D. (Jou-Al) Burwell, Connie Burwell, Aaron Felder, DeVaughn (William) Baker III, William Felder and Deborah Williams; 1 God-daughter (Marsha Jones); 15 grandchildren; 12 great-grandchildren; 6 sisters-in-law; and a host of nieces, nephews, cousins and friends.

The eldest of 6 children, Ordlee Felder was born in Bishopville, South Carolina on June 28, 1920 to sharecroppers William and Azie Felder. At the tender age of thirteen, Ordlee embarked on a journey northward in hopes of a batter life. After... View Obituary & Service Information

The family of Ordlee "Kilroy" Felder created this Life Tributes page to make it easy to share your memories.

The eldest of 6 children, Ordlee Felder was born in Bishopville,...

Send flowers to the Felder family.