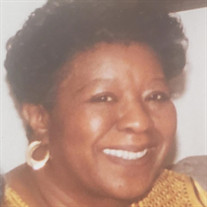 Dr. Rachel W. Jones, 86 passed away quietly on February 17, 2021 at Shadyside Hospital in Pittsburgh, PA. She was the second child born to Emmett Gurtha Woods and Jessie Mae Ellis Woods on December 2, 1934 in Troy Alabama. The family, including sister, Ann and younger brother Fred relocated to Pittsburgh in 1940. The family made their church home at Second Baptist Church of Homestead. Rachel was a long-time dedicated and active member serving on the Trustee Board, the Nurses auxiliary, and the Emmett Frederick Woods Scholarship Tea which was named for her brother who died in 1962. Rachel was educated in Pittsburgh Public schools starting at Burgwin Elementary, then Gladstone Junior High, and on to graduate from Taylor Allderdice in 1954. A life-long learner who for many years could be found spending late nights at her kitchen table among piles of books filling endless tablets with, Rachel would go on to earn her Bachelor’s, Master’s, and Doctorate degrees in Education from Duquesne University and The University of Pittsburgh. Rachel started her teaching career at Baxter, and steadily rose through the ranks to lead as Vice Principal at Fricke, Principal at Lemington, and Principal at Crescent. As a founder of the Greater Pittsburgh Alliance of Black School Educators she further demonstrated her dedication to expanding children’s education – particularly children of African descent. In 1989 Rachel was recognized by the Principal’s Academy with the Distinguished Principal’s Award for setting high standards for instruction, student achievement, character, and climate for the students, families, and staffs in their learning communities. She was a Teacher’s Teacher advising, mentoring, encouraging, and celebrating many others along the way. A deeply committed member of Delta Sigma Theta Sorority, Inc. since she pledged in college, Rachel assisted in mentoring and pledging several generations of her DST sorors. She was honored to serve as the Pittsburgh Chapter President from 1987 – 1989, and she traveled the country to participate in just about every regional and national convention. In 1958 Rachel was married to Faithy L. Jones (deceased) and was a dedicated spouse throughout their union of 20 years. She enjoyed cutting up with her friends, loved cards and board games, was a diehard Steelers fan, enjoyed jazz music, sports cars, and chocolate desserts. She was especially known for her sense of style and affection for classic clothing, and her no-nonsense demeanor. Rachel is preceded in death by her parents: Emmett “Gurtha” Woods (1988) and Jessie Mae Woods (2003); Brother: Emmett “Fred” Woods (1962); and Nephew: Dr. Bryan K. Tippett (2015) whom she referred to as her best friend. Her memory will be cherished by: Sister: Ann Tippett; Cousin: James Jiles, Sr. (Shirley); Aunt: Pearl Bundridge; Sister-in-Law: Odessa Woods Mathews Johnny); Nieces: Lydia Woods and Jo Anne Tippett; Nephews: Gordon Tippett and Julian Tippett (Tiffani); Great Nieces: Alexis Tippett Coles (George) and Schae’mar Tippett; Great Nephews: Emmett “Avery” Woods-Gresham and Julian “JT” Tippett, Jr. and Great-Great Nephew: Joshua Tippett, PLUS a host of beloved cousins and very special “extended” nieces and nephews: Tina, Dannita & Jaion, and Damiene & Damiene “DJ” Jr. In one way or another, Rachel had a hand in raising us all! So, while we will miss her deeply and dearly, we are rejoicing and grateful as we celebrate her life!

Dr. Rachel W. Jones, 86 passed away quietly on February 17, 2021 at Shadyside Hospital in Pittsburgh, PA. She was the second child born to Emmett Gurtha Woods and Jessie Mae Ellis Woods on December 2, 1934 in Troy Alabama. The family, including... View Obituary & Service Information

The family of Dr Rachel W Jones created this Life Tributes page to make it easy to share your memories.

Send flowers to the Jones family.