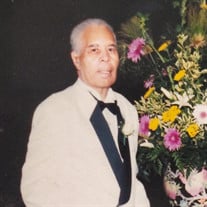 It is with great sadness that the family of Robert (Bobby) Lee announce his homegoing on Tuesday, July 21, 2020 at his home surrounded by family at the age of 95 years. Robert was a graduate of McKeesport Area Senior High School. His stellar military and professional career expanded a lifetime of great achievement. These events were not just limited to civilian life but encompassed his military pursuits. Upon graduation from high school he enlisted into the Army serving in World War II. Upon returning from active duty and having a strong interest in mortuary science, Robert graduated first in his class from the Pittsburgh Institute of Mortuary Science. Always a steward of academic excellence, Robert received his Bachelor of Arts from Duquesne University while concurrently serving in the ROTC. He resumed active duty as a 1st Lieutenant in the Korean War and was honorably discharged and promoted to the rank of Captain in the Army Reserves. Robert’s pursuit of life-long learning culminated in completing his Masters in Social Work (MSW) from the University of Pittsburgh. Robert’s employment commenced at the Allegheny Department of Public Welfare where he impacted the social issues of children’s and families. A monumental aspect of his professional career was his leadership at Community Action Pittsburgh and management of tailored programs to improve communities by empowering the lives of low-income people to self-sufficiency. His commitment to advocating for an engaged workforce also meant providing opportunity for skilled workers into positions that allowed them to realize their full potential. Robert concluded his social work service at Jewish Family Services and at Children’s Youth Services. He retired from his Allegheny County position in 1989. His heartfelt commitment and dedication were exemplified in his civic duties, especially his membership in Booker T. Washington Lodge #218, an organization he viewed as an embodiment of Brotherhood and a catalyst for change in uplifting and promoting the Black community. Robert was an intricate part of the organization from his initiation in 1946 to serving in multiple leadership positions. His extraordinary contribution to BTW #218 was a chronicled history he penned of the past 100 years of the organization presented at the 100th Anniversary Banquet. He was also a member of the American Legion Post 666. Always guided by the Lord God Almighty as the center of his life, Robert carried out his spiritual journey as an active member of First United Methodist Church of McKeesport. Robert’s life stands as a mosaic to one who rose from humble beginnings to attain many personal and professional accomplishments. He always saw the greater good in humanity. In the words of civil rights activist, the late John Lewis, “Ours is the struggle of a lifetime, or maybe even many lifetimes and each one of us in every generation must do our part”. Robert will be lovingly remembered for his part in selfless acts that shaped the lives of many. Robert is survived by his loving wife and partner of 72 years, Ethel Dolly Lee, four children, son Creighton (Marlyn) Lee of Danbury, CT; Jennifer Lee of Washington, DC.; Dr. Roberta (Thomas) Powell of Philadelphia, PA; and Dr. Diane Lee of Philadelphia, PA; five grandchildren, Shani Lee, Creighton Lee Jr, Thomas (Tynishia) Powell, Justin Powell, and Ashley Powell; one great granddaughter, Tommi Powell along with a host of beloved nieces, nephews, relatives, and close friends. He is preceded in death by his parents James and Emma Frances Lee; siblings, Carl, Harry, Lawrence, Kenneth, Willard, Roy, Frances (Babe) Sayles, and Jean (Dinnie) Sayles. Visitation will be held at First United Methodist Church, 1406 Cornell Street, McKeesport, PA on Wednesday July 29th from 5pm until 7pm and Thursday July 30th from 8am to 10am, with the funeral service to follow at 10:30am. In lieu of flowers, donations may be made to the First United Methodist Church in memory of Robert C. Lee.

It is with great sadness that the family of Robert (Bobby) Lee announce his homegoing on Tuesday, July 21, 2020 at his home surrounded by family at the age of 95 years. Robert was a graduate of McKeesport Area Senior High School. His stellar... View Obituary & Service Information

The family of Robert C Lee created this Life Tributes page to make it easy to share your memories.

It is with great sadness that the family of Robert (Bobby) Lee...

Send flowers to the Lee family.