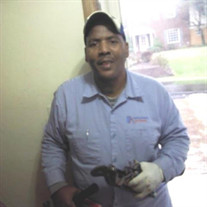 Ronald Craighead was born September 30, 1951 to Ernest Porter Craighead and Vivian Griffin in Pittsburgh, Pennsylvania. He was raised in the Glen Hazel part of town. He attended the Rec. Center Preschool, Burgwin Elementary, and graduated from Gladstone High School in 1969. Ronnie quarter-backed for the Gladstone Gladiators Football Team during his senior year and at the same time, keeping an eye on a certain cheerleader! He was united in marriage tp his high school honey, Louise (Bunny) Craighead-Jenkins and from that union came two children, Ronald and D'Yanna Craighead. Ronnie was accepted into the Plumbers Union Local #27 Apprenticeship Program & completed 3 1/2 years training. He was hired and employed as a plumber with the Housing Authority of the City of Pittsburgh where he worked 10 years before a back injury retired him. Ronnie was a gambler. He loved playing poker, dice, card games and he loved going to the casinos He would chauffer his mom and Aunt Morant to the various casinos in Pennsylvania. He would also take all the bus trips from Glen Hazel to the casinos and he couldn't wait for the Rivers Casino to be completed where he ran into a "lot" of family and a "lot" of friends! Ronnie leaves to cherish his memory, brothers, Dennis (Donora) Craighead and Ernest Craighead; sisters, Gwendolyn (Derwood) Craighead Dunn, Wanda Christian, Mildred Jenkins, Colette Duck, Camelle Craighead, Margaret Reed and Karen White; son, Ronald W. Craighead; daughter, D'Yanna Craighead; one granddaughter, Jaden Applewhite; a host of Holloway cousins, and a host of nieces, nephews, other relatives and friends.

Ronald Craighead was born September 30, 1951 to Ernest Porter Craighead and Vivian Griffin in Pittsburgh, Pennsylvania. He was raised in the Glen Hazel part of town. He attended the Rec. Center Preschool, Burgwin Elementary, and graduated... View Obituary & Service Information

The family of Ronald Craighead created this Life Tributes page to make it easy to share your memories.

Send flowers to the Craighead family.