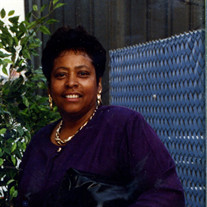 Rose Geneva Burgwin Todd was born April 6, 1939. She was the first of four children and the only girl of James and Geneva Burgwin. She grew up on New Homestead hill but later resided in Homestead for the duration of her life. She attended Taylor Allderdice High School in Pittsburgh. During Rose's adulthood, she was united in marriage to Louis Todd II and they raised 5 children together. She worked at the Riverview Center (Jewish Homes & Hospice) as an Aid for 27 years. While working there she became a Union Steward for District 1199. Also throughout Rose's life, she was an honorary member of the Sphinx based out of the Hill District and a member of the Senior Saints of Mt. Rise Baptist Church in New Homestead, PA. First and foremost, Rose loved and was devoted to her family. She loved to cook for her family and friends. She would always make Sweet Potato pies for every holiday. She enjoyed a good card game and night out on the town. She took care of everyone around her without hesitation. She also didn't mind a good fight if you messed with her or her family. She loved God and the Word, even still receiving her Holy Communion from her bedside every month. Rose is preceded in death by her husband Louis Todd II, her mother and father, James and Geneva Burgwin, her brothers Jerry and Gerald Burgwin. She leaves to cherish her memory her brother Edward (Evie) Burgwin of Ft. Lauderdale, FL, her 6 children Jeffrey (Donna) Burgwin of San Antonio, TX, Duane (Satara) Burgwin of West Mifflin, PA, Eric (Natosha) Seibles of Braddock, PA, Cheryl Thompson of Homestead, PA, Linda Todd of Homestead, PA and Louis (Ruth) Todd III of New Jersey. Stepdaughters Marlene (Don) Murphy of Homestead, PA. and Shadena Todd of Homestead, PA. One uncle James (Lenora) Garner of Monroeville, PA. Special friends Rosiland White Duane Swayzer, Paulette Brown, and Marie Wiley. 22 grandchildren and 23 great grandchildren. Also a host of family and friends too numerous to list.

Rose Geneva Burgwin Todd was born April 6, 1939. She was the first of four children and the only girl of James and Geneva Burgwin. She grew up on New Homestead hill but later resided in Homestead for the duration of her life. She attended... View Obituary & Service Information

The family of Rose Geneva Todd created this Life Tributes page to make it easy to share your memories.

Send flowers to the Todd family.