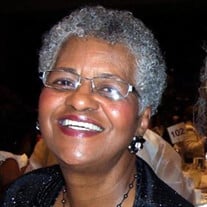 Sherlynn D. Reid, age 85, of Oak Park; transitioned on March 10, 2021 after a medical emergency. Born in Pittsburgh, PA to the late Mary Dee (Goode) and Franklin. She attended Schenley High School, Class of 1954. She had a radio show as a teenager, she was known as Little Dee. She also worked in her uncle Bill Goode’s Pharmacy. She attended Fisk University to study arts and drama. She later met and married Henry Reid (Schenley Class of 51) and three daughters were born of that union. They moved to Cleveland, then Detroit and finally to Oak Park, IL. She was involved with the League of Woman Voters, Human Relations Commission and later became the Director of Community Relations for the Village of Oak Park for more than 25 years, retiring in 1999. She was a member of First United Church of Oak Park. She was also a long- time member and Past President of the 19th Century Charitable Association in Oak Park, IL. She is also a Charter member of the West Towns Chapter (IL) of the LINKS, Inc. Over the years Sherlynn was the recipient of numerous awards for her service and love for the community. Sherlynn was preceded in death by her husband, her parents Franklin and Mary Dee, and her sister, Yvonne “Bonnie”, her twin brother Sherwood and her youngest brother Franklin “Buddy”. She is survived by her daughters; Mary, Dorothy and Lorie (Cederick) Fuller; her grandsons, Henry Ryan Reid, and Connor and Isaiah Fuller and by a host of nieces and nephews, cousins, and dear friends. Visitation will be held Sunday March 10, 1 to 4 p.m. at Drechsler, Brown & Williams Funeral Home, 203 S. Marion St., Oak Park. Grave side service will be held at Restland Cemetery in Monroeville, PA. In lieu of flowers, donations to C.A.S.T., Henry E. Reid Scholarship Fund (jpnose19.wixsite.com/cast-at-pjms/reid-fund) are appreciated. Visitation info: drechslerbrownwilliams.com Graveside information: www.tuniefuneralhome.com

Sherlynn D. Reid, age 85, of Oak Park; transitioned on March 10, 2021 after a medical emergency. Born in Pittsburgh, PA to the late Mary Dee (Goode) and Franklin. She attended Schenley High School, Class of 1954. She had a radio show as a teenager,... View Obituary & Service Information

The family of Sherlyn D Reid created this Life Tributes page to make it easy to share your memories.

Send flowers to the Reid family.