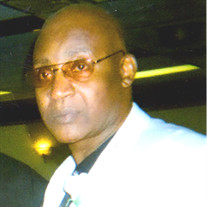 William Joseph Chaffin was born on February 9, 1948 in Pittsburgh, Pennsylvania. He was the son of 9 children from the union of Clifton (Tex) and Nelena Chaffin. "Billy Joe" as he was always known by family and friends alike, was raised in the then closeknit mill town community of Homestead where he was educated in the Homestead Public School System and was a 1967 graduate of Homestead Senior High School. In high school he was a standout basketball player. The high point in his career was receiving the MVP (Most Valuable Player) trophy for most points scored in the school's championship game. Billy Joe was united to Debbie Dent and from this union 3 children were born. He did a short stint in the military and afterwards worked for a time for United States Steel. His last employment was with Jefferson Hospital in the construction department until his health no longer permitted him to do so. On March 25, 2000, Billy Joe was united in marriage to Edna Davis and welcomed her 2 children into his life. He was a "gentle giant". He loved to laugh an make others do the same. Family gatherings were his favorite thing and he was always up for a good meal, especially fried chicken. He was loving, considerate, and when he was happy his eyes would twinkle. He also rededicated his life to the Lord. Sadly, on February 8, 2017 the Lord saw fit to call William Joseph Chaffin, Sr. home. He is preceded in death by his parents; sister, Daisy Mercado and brother-in-law, Wiley Hines. He leaves to honor and cherish his memory, beloved wife, Edna Chaffin; children: William (Anitra) Chaffin, Jr., Dawn Chaffin, Tennille (Tameka) Chaffin, Antonio Jackson, and Dionne Jackson (Marty) Harris; brothers: Theodis (Joan), Carl (Valerie), Robert (Rita) Alphonso and Ricky Chaffin; sisters: Juanita Hines and Ruth Ann Chaffin; 19 grandchildren, 9 great grandchildren, nieces, nephews, other relatives and good friends.

William Joseph Chaffin was born on February 9, 1948 in Pittsburgh, Pennsylvania. He was the son of 9 children from the union of Clifton (Tex) and Nelena Chaffin. "Billy Joe" as he was always known by family and friends alike, was raised in... View Obituary & Service Information

The family of William "Billy Joe" Chaffin Sr created this Life Tributes page to make it easy to share your memories.

William Joseph Chaffin was born on February 9, 1948 in Pittsburgh,...

Send flowers to the Chaffin family.