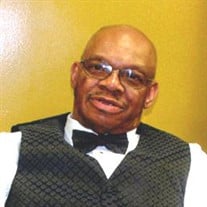 William Phillip Taylor, Jr. was born on May 8, 1943 in McKeesport, Pennsylvania. He was the son of Flora Mitchell Taylor and William Phillip Taylor, Sr. "Bill" as he was known to family and friends alike, spent his early years in Duquesne, PA before moving to the East Liberty section of the city where he attended and graduated from Peabody High School. He continued his education at Kentucky State University also playing football there as he did Peabody. Bill, like many of the young men of his generation, enlisted in the military. He chose the United States Army where he earned both parachutist and sharpshooters badges. After serving his tour of duty with an honorable discharge, Bill returned home. Bill worked for the Genesis Nursing and Rehabilitation Center and was a loyal and faithful employee up to his passing, On August 3, 2014, Bill was united in marriage in a loving and blessed union to Lina Irene Washington. Bill would accompany Lina to services at First Missionary Baptist Church. On August 27, 2019 he professed Christ to be his personal Savior. Bill was a wonderful storyteller who transfixed his audience with his tales. He also loved to sing and had a beautiful voice. He loved all sports, but the Pittsburgh Steelers held a special place in his heart. Bill never ever said goodbye. It was always "chow chow baby." On September 4, 2019 the Lord called Bill home. He is preceded by his parents, Flora and William Taylor, Sr.; sister, Elenor "Peanut" Taylor; paternal grandmother,Donella "Churchie" Powell; aunt Eunice David; and stepmother, Kathleen Taylor. He leaves to cherish and honor his memory his beloved wife and best friend, Lina Irene Taylor; son, who he loved dearly, Rashad (Sarah) Taylor; devoted and loving stepchildren: Johnie (Michelle) Washington, Courtney (Tinamarie) Washington, Amber, Brandi Washington; 23 grandchildren; 13 great grandchildren; 6 sisters: Caroline Hollis, Sherry Ann Burrell, Eunice Carrol, Yvonne "Trudy" (Abraham) Reed, Rachelle "Peaches" Taylor, and Carla Rose; nieces; nephews; great nieces and nephews; other relatives,coworkers, and good friends too numerous to mention. He is already missed.

The family of William Phillip Taylor Jr. created this Life Tributes page to make it easy to share your memories.

Send flowers to the Taylor family.